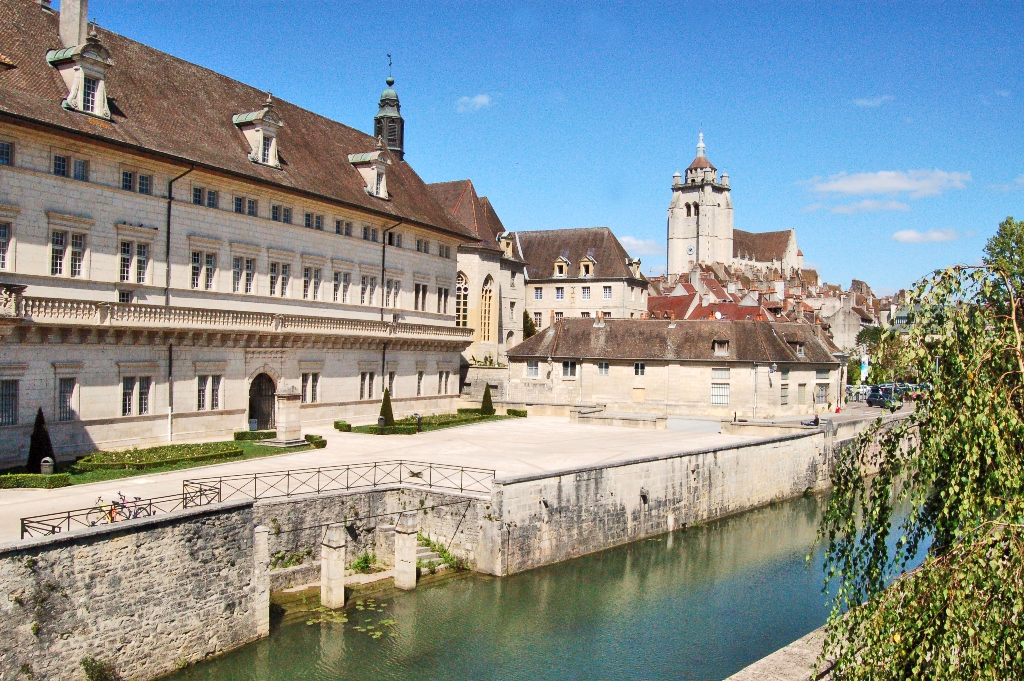 An edifice built during the XVIIth century:

The hotel-Dieu is an imposing building, characteristic of the Renaissance style used in Dole in the 16th and 17th centuries. Its construction, which began in 1613, was long interrupted by the sieges and wars that the city had to face on three occasions between 1636 and 1674. But the main part of the buildings were completed in 1636.
In the 17th century, the Hôtel Dieu was the most important construction site carried out by the city council when it comes to its impact on the urban landscape.

The architecture of the building:

The facade on the canal, very harmonious, gives an impression of rigorous severity and sobriety. In this composition, horizontal lines dominate, with the enormous balcony that bars the whole façade. This balcony holds surprises for those who approach the building. When looking more closely, they will notice the astonishing abundance of sculpted decoration that invades the cantilevers supporting the balcony: masks, fruits, flowers, greenery, geometric patterns, mules of lions, monsters ... make up a very varied set. At one end of the balcony a magnificent corbelled turret was built in 1686.

A hospital then a media library:

The vocation of the Hôtel Dieu was to welcome the sick, especially the poor who could not be taken care of at home. In 1663, a few hospital sisters from Sainte-Marthe came from Beaune to care for the sick and founded the first community of sisters at the Hotel-Dieu. This hospital operated for several centuries until 1973, when it was transformed into a geriatric center while the “Centre Hospitalier Louis-Pasteur” (general hospital Louis-Pasteur) opened its doors. Since 2000, the building has become the “Mediatheque” (a multimedia library).

Stay up to date with news from Dole Tourisme